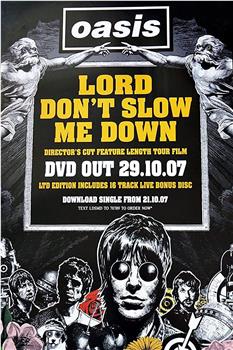 Lord Don't Slow Me Down is a rockumentary film, looking back on British band Oasis' Don't Believe the Truth world tour which took place from May 2005 to March 2006. The film is directed by Baillie Walsh.  A handful of fans-only private screenings took place around the world with the world premiere of the film at the Directors Guild Theater in New York **** on November 4, 2006 as...